A 'Cardiac Patch with Bioink' Developed to Repair Heart 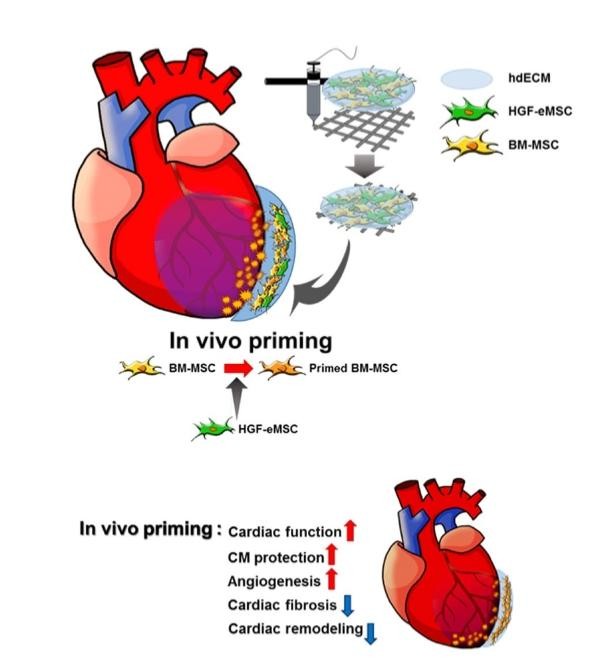 Schematic diagram of the underlying mechanism of in vivo priming of BM-MSCs with HGF-eMSC (Photo : Jinah Jang (POSTECH))

The heart is the driving force of circulating blood in the body and pumps blood to the entire body by repeating the contraction and relaxation of the heart muscles continuously. Human stem cells are used in the clinical therapies of a dead heart, which happens when a blood vessel is clogged or whole or a part of the heart muscles is damaged.

The clinical use of human bone marrow-derived mesenchymal stem cells (BM-MSCs) has been expanded but the failure of the transplanted stem cells in the heart still remains a problem. Recently, an international joint research team of POSTECH, Seoul St. Mary's Hospital, and the City University of Hong Kong developed a 'cardiac patch with bioink' that enhanced the functionality of stem cells to regenerate blood vessels, which in turn improved the myocardial infarction affected area.


The joint research team consisted of Prof. Jinah Jang and Dr. Sanskrita Das of POSTECH Creative IT Engineering, Mr. Seungman Jung of POSTECH School of Interdisciplinary Bioscience and Bioengineering, Prof. Hun-Jun Park, Mr. Bong-Woo Park, and Ms. Soo-Hyun Jung of The Catholic University, and Prof. Kiwon Ban and his fellows from the City University of Hong Kong. The team mixed genetically engineered stem cells (genetically engineered hepatocyte growth factor-expressing MSCs, HGF-eMSCs) developed by SL Bigen. Co., Ltd to make bioink in the form of a patch and introduced a new therapy by transplanting it to a damaged heart. They called this new strategy 'in vivo priming'. The name came from the principle that the maximized function of mesenchymal stem cells are maintained in vivo as well as through its exposure to the growth factor secreted by the genetically engineered stem cells.


The joint research team first genetically engineered the existing BM-MSCs to produce hepatocyte growth factor consistently to improve the therapeutic potential of stem cells. The engineered stem cells (HGF-eMSCs) were then mixed with BM-MSCs to make the bioink. They transplanted the cardiac patch with this bioink to the heart muscles affected by myocardial infarction. Considering the limited amount of cells that could be transferred, they used heart-derived extracellular matrix bioink to make a cardiac patch.


Implanted cells in a patch survived longer in vivo and had more myocardiocytes survived than the only BM-MSCs transplanted experimental group. This was because the secretion of cytokine, which helps the formation of blood vessels and cell growth was maximized and delivered nutrients fluently that promoted vascular regeneration and enhanced survival of the myocardiocytes.


"We can augment the function of adult stem cells approved by the Ministry of Food and Drug Safety and FDA using this newly developed and promising 3D bioprinting technology with the engineered stem cells. It is our goal to develop a new concept of medicine for myocardial infarction in the near future," said Prof. Jinah Jang who led the research.


POSTECH began to develop medicine for cardiovascular diseases based on this newly developed bioprinting method with the research team from The Catholic University in 2017. Now, it is being tested in animals for efficacy evaluation with Chonnam National University. Also, the technology is already transferred to T&R Biofab, which is a company developing 3D printers, software, and bioinks to print cells.